" Dear friends from the Universe !

We are the children from the Earth planet, sending this Message to you. We want you to know, that you are not alone in the Universe.

We offer to be your friends. The Galaxy, where you and we live, is our common Home.

We named it the Milky Way. The Earth planet is moving around the star named Sun.

The planet itself is covered by ocean and land. There are many creatures living our planet; but only people have created a technological civilization.

We live in families: parents and children. Children like to play. We would like to show you our games, drawings, music. The duration of our life is about 80 years.

While writing this Message, we are from 13 to 18 years old. So, we hope to receive your answer. People have many cultures, languages and religions.

People have reached the technical progress, but scientists have also invented horrible weapons, which may destroy the life on our Earth.

Our planet is very beautiful, but it is ill.

Our problems are wars, ecology, exhaustion of natural resources. But we hope we shall overcome these problems and all people on Earth will be happy!

We would like about you! Please, reply. We would be very glad. We wish you peace and love.

The children from the Earth, August- September, 2001."

On August 29, 2001, this message of peace was sent for the first time from the radio telescope of Evpatoria in Ukraine (Evpatoria Deep Space Center) It was financed by the Russian government and the "Nacional Space Agency" of Ukraine and was orchestrated by the SETI group.
setileague.org/articles/tam.htm
cplire.ru/html/ra&sr/irm/teen-age-message.html

The target star today was HD 197076 in the constellation Dauphin. A few days later the operation was repeated 5 times, to other stars in the Milky Way. 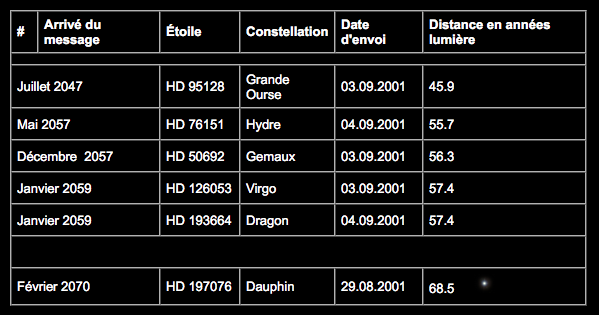